September 30, 2013
I really wanted to go all out and make blue crystal cupcakes and stuff, but Saturday night I was so exhausted after work I dragged my feet around the super and just grabbed this stuff. 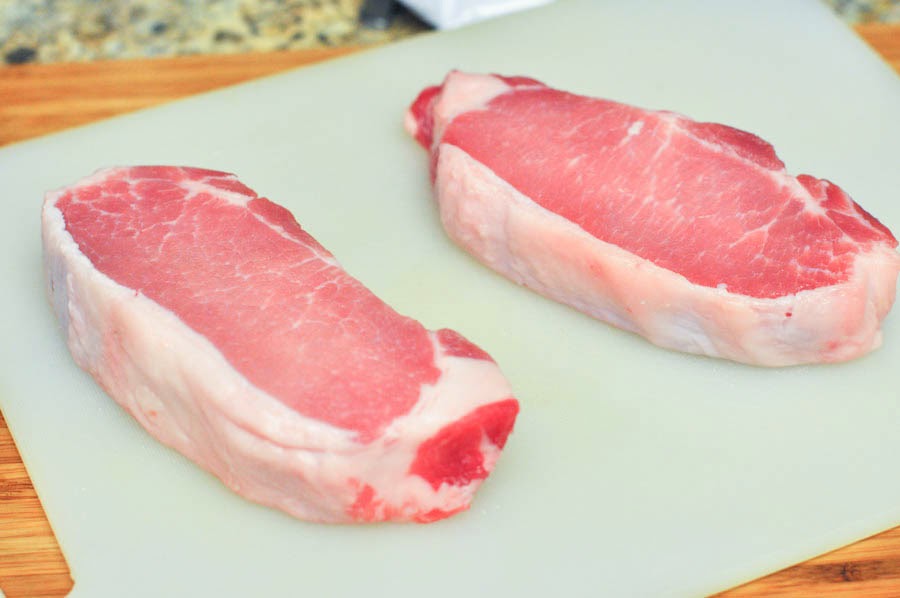 Thick boneless porkchops.  Next time I may get bone in.  Oh I trimmed most of the fat after this picture. Baked potatoes.  I saw a picture on Reddit and it looked so good I had to give it a shot.  A good tip I read there was to put a wooden spoon handle next to potato so you don't cut all the way through.  I sliced this by hand. 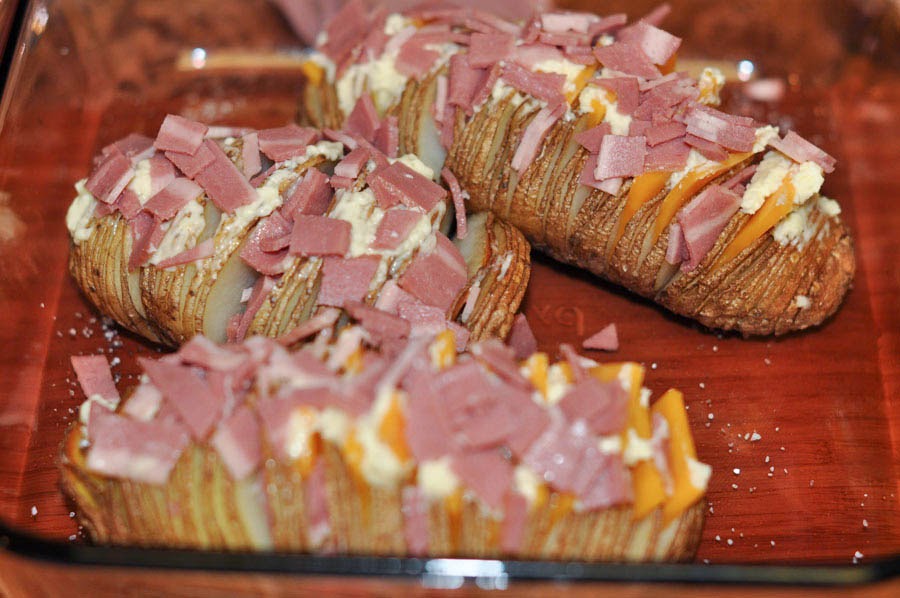 Was in the oven for an hour, and took it out to put some cheese and bacon on it.  I cheated and used turkey bacon.  1 less step to take.  I like the skin on baked potatoes, but if I made this again I would peel it because it got a little hard and crunchy with the long cooktime.  This went back in the oven for 35 more minutes (375). 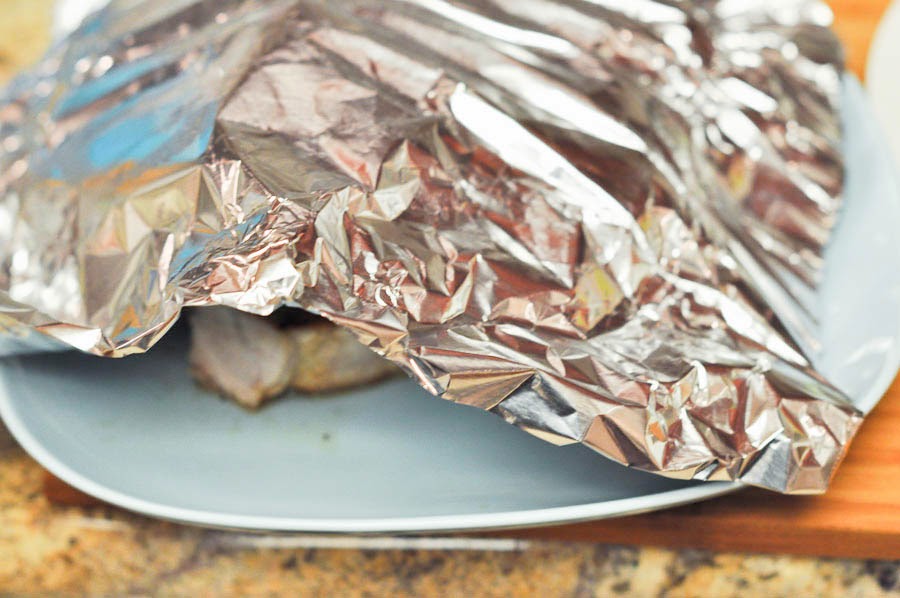 I put salt and pepper on the pork an hour and a half before cooking.  30 mins before they hit the pan I put them out on the counter.  I patted them dry and put a little more salt and a sprinkle of sugar right before I cooked them. 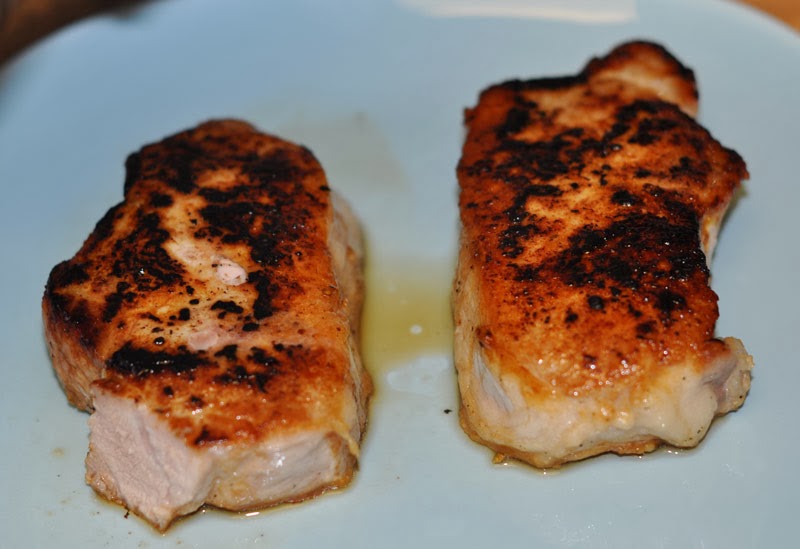 I flipped the pork every minute or so for about 6 mins and then poured about a cup of stock into my pan and covered for 5 minutes.  Once they were 140 fahrenheit inside I put them on a plate and covered with foil to rest for 10 minutes.

The left pork chop you can see 2 dots where I took the temp.  This left one was less juicy than the right.  When I first pulled off the foil after resting, the juice you see on the plate was only around the left chop.  The right one was super juicy.  Lesson learned, don't poke it twice! 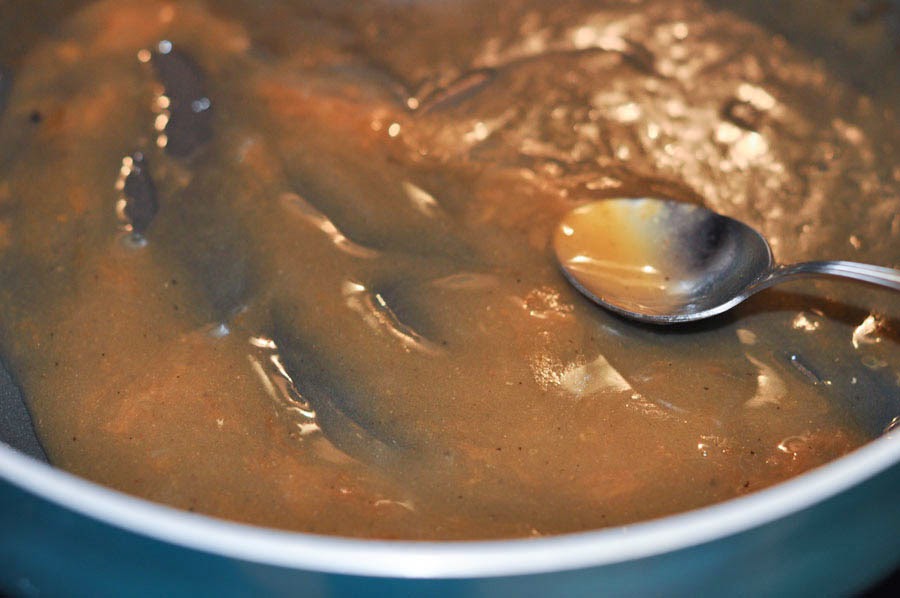 There were delicious looking nibbly bits in the pan so I made a gravy with it.  It was salty so I just added some water until I liked the taste and thickened it with some starch. 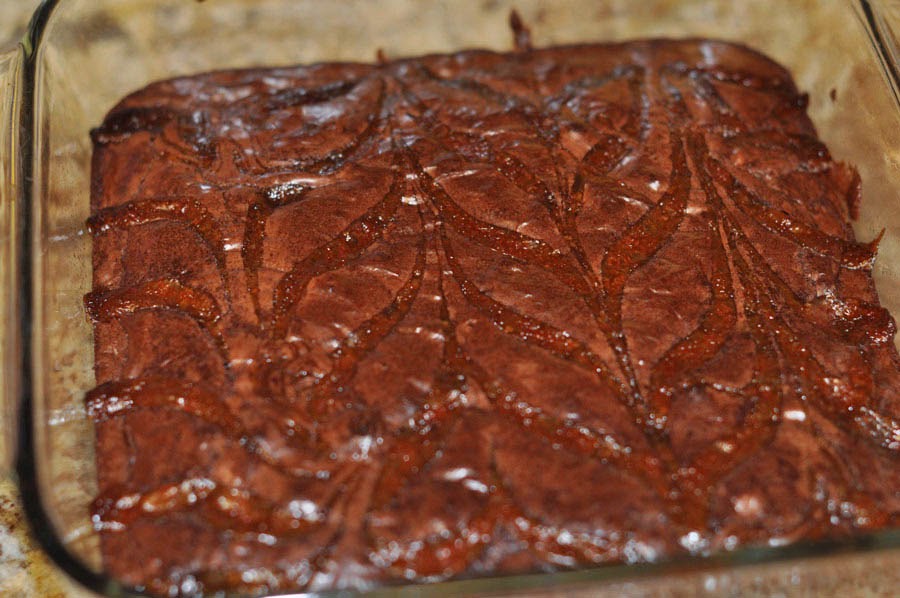 Even tho I didn't make the cupcakes I still had to make dessert!  This was turtle caramel brownies. 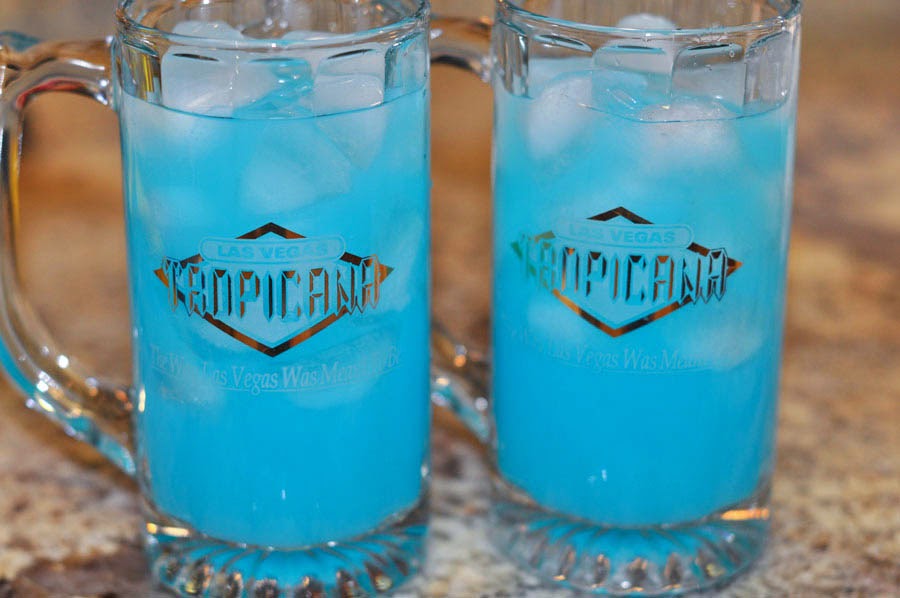 Had to have something blue so here is blue Kool Aid, this was really good!  I think it is blue raspberry lemonade. 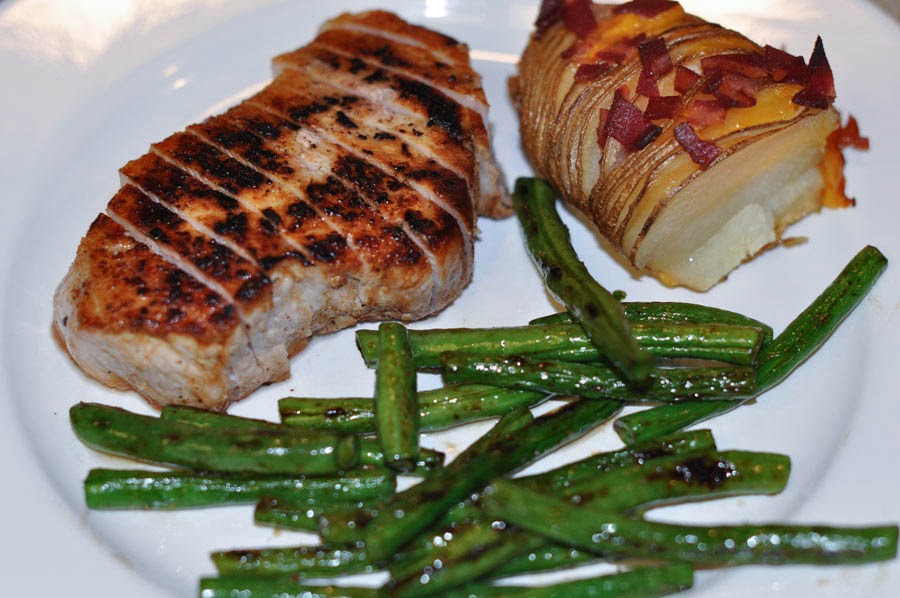 The dinner on a plate.  The pork was huge so I couldn't finish it or my potato half, oh well this will make a good leftover for tomorrow.

Good show, good dinner, my night was made! 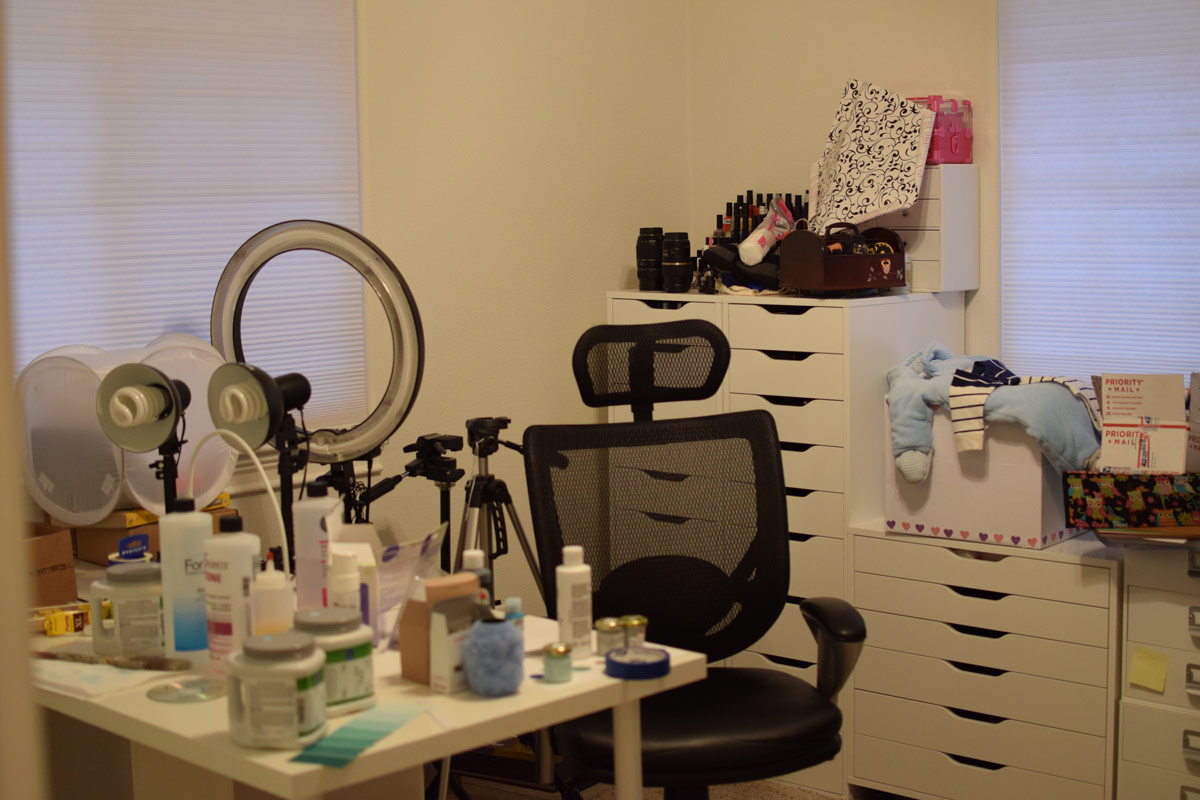 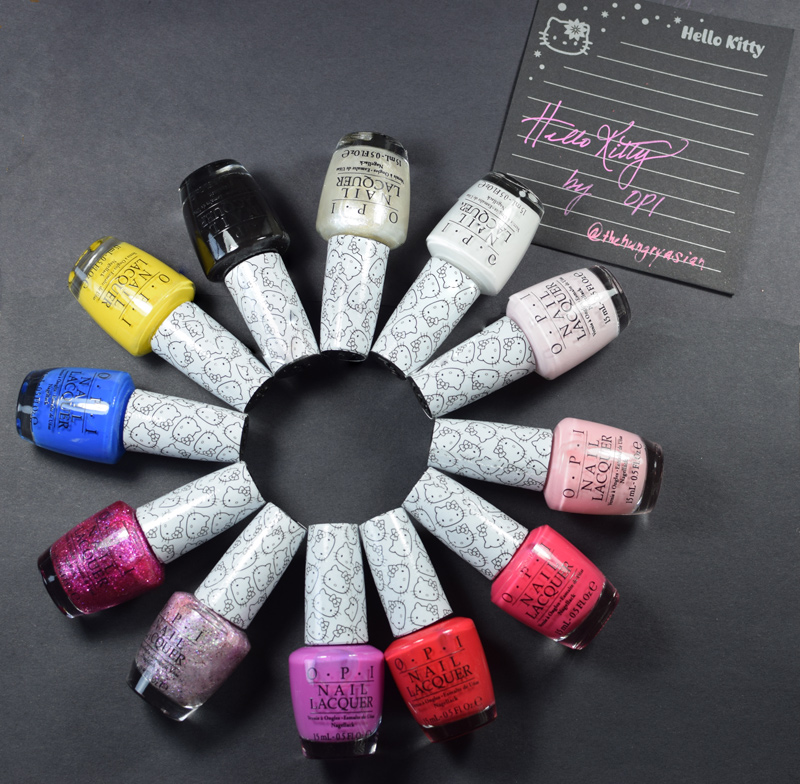 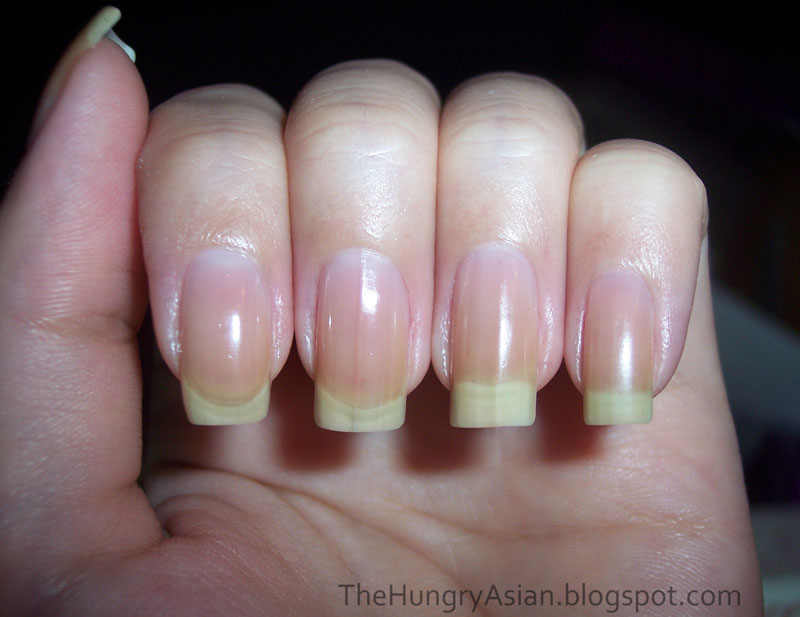